Introduction
This analysis tries to imagine the world 1,000 years from now. It will describe four types of civiliza­tions that might dominate the world by the end of the third mille­nium. These civiliza­tions should not be imagined as separate nations or geographi­cally distinct empires - but rather as basic types of social organi­zation that would exist con­current­ly - even in the same area. They are types of sub-cultures or small societies - derived from fundamental human traits that are assumed to be relatively stable.

Of course, whatever we might imagine about the future could be pathetically wrong. The author is quite aware that he may make a fool of himself - as so many before, who had tried to look into the future.
Even some of the smartest engineers and scientists have published pre­dictions that proved to be grotesquely inaccurate only a few years later. Here is a short, but easily extendable, list of some of the most notable failures:


"The Americans have need of the telephone, but we do not. We have plenty of messenger boys." - Sir William Preece, Chief Engineer, British Post Office, 1878

"Rail travel at high speed is not possible because passengers, unable to breathe, would die of asphyxia." - Dr. Dionysius Lardner, 1830

"There is not the slightest indi­cation that nuclear energy will ever be obtainable. It would mean that the atom would have to be shattered at will." - Albert Einstein, 1932

"I think there is a world market for maybe five computers." - Thomas Watson, chairman of IBM, 1943

This clearly illustrates that even some of the smartest people failed to pre­dict developments in their own field of expertise that were just around the corner.
Why are predictions so difficult?
Do these failures to predict technical developments prove that absolutely nothing can be said about the future? Let's look into this problem a bit more carefully:

In order to better understand the dif­fi­culties in predicting human development it makes sense, I believe, to distinguish two fundamentally different factors that can disrupt predicted trends:


Totally random, external events - such as the earth being hit by a massive meteorite or the arrival of an extraterrestrial species;

Much less random, but still difficult or perhaps impossible to predict, impacts of human actions.

The first category of events, those that are entirely beyond our control, are cosmological catastrophes that can happen at any time. Maybe the sun has just exploded three minutes ago for some unknown physical reason and we all will be evaporated in five minutes. Maybe a meteorite, big as Manhattan, is on a collision course with earth and will hit us three months from now. All this can happen - but it is not very likely to happen within the next 1,000 years.
These massive catastrophic events typi­cally occur in time-scales of hundred-thousands or millions of years. While they can happen tomorrow, they are more typical to happen at some time over the next 100,000 to 10 million years. In other words - their prob­ability of occurring is "smeared out" over a very long time. Even if there is a high prob­ability that earth will eventually be hit by a massive meteorite, it would be really "bad luck" if it were within the next 1,000 years (Cotton-Barratt, 2016).

The second category of unpredictable events has a much shorter time scale: We probably make decisions today that will significantly affect the course of human affairs over the next 100 years. Consider climate change! If the global climate really depends on our CO2 emissions (as most re­searchers believe) our decisions over the next 10 to 20 years can accelerate or slow down global warming and significantly affect living conditions already within a few generations.
In fact, American Journalist David Wallace-Wells has argued that climate change could cause devastating environ­mental, social and political conditions already within the lifetime of a teenager living today (Wallace-Wells, 2017).

The future is so hard to predict, not because totally random external events can happen, but because it depends on our decisions and actions, which we understand only rather poorly. The future is unpredictable, because we are unpredictable.

We have demonstrated in our history a remarkable propensity to abruptly change course. Consider some of the political events in recent history: Virtually no one had foreseen the collapse of the Soviet Union and the Unification of Germany - not even a few months before it actually happened. Hardly anyone could imagine that the United States would not elect a former First Lady and seasoned politician to be President of the United States, but a Reality TV Host with dubious political expertise. Observers couldn't believe their eyes, when the results of the BREXIT referendum came in and a clear majority decided to separate from the European Union. And many Germans couldn't believe the wave of welcome that some of their countrymen (and women) offered to the wave of refugees and migrants from the Middle East. Almost overnight the relatively closed society of Germany became the symbol of a multi-cultural immigrant society.


The impact of human actions on public health
In late 2019 almost everyone was planning their vacations for the coming winter. Cruiseships were already fully booked for the next summer vacations. No one had any idea that in Wuhan, China a few people suffered a strange kind of illness where people lost their sense of smell and taste and quickly developed a life-threatening shortness of breath. Hardly anyone outside of China took notice. Only when news agencies reported incredibly drastic quarantine measures from China, such as cordoning off complete multi-million cities with military measures, people began to worry. A few days later open panic began to develop, when videos showed people in Wuhan walking along sidewalks suddenly dropping dead on the spot.
Only a few experts (and one notable billionaire) had the foresight to imagine that this could be the beginning of a worldwide pandemic. Today, as of May 2021, some 165 million worldwide have been infected with the new Corona Virus and about 3.4 million people have died of it. Almost all countries around the world had to shut down their economies to slow down the spread of the virus, with devastating consequences for individuals and whole societies. The Corona-Epidemic, while still raging on in many parts of the world, is a good example, how human actions drastically impact the course of history. In other words: What really is changing the world are the decisions and actions of people - often of large groups, but sometimes just those of one powerful leader.
Predicting basic social structure instead of technology.

If the future depends on human decisions and actions we must try to better understand which of those actions are easier, and which are more difficult to predict. By looking carefully through predictions from the past, it appears that those were most frequently wrong that dealt with specific technologies or scientific discoveries. However, when it came to human behavior, social structure or demographic trends predictions were often surprisingly accurate - not because such predictions were somehow better, but because much less had changed in the social than in the technical world.
Consider, for a moment, the Greek tragedy, a form of theatre which reached its most significant form in Athens in the 5th century BC: it often describes human behavior that hadn't changed much over the past 2,500 years. In fact, Greek tragedies often tell stories of human relations that could have happened in our time. This is one of the reasons why we still play them in our theatres today.
Or think of some of the basic insights concerning the organization of political affairs. The "res publica" of ancient Rome (503 BC to 27 BC) describes most fundamental political processes that we also can find today - including conflicts, betrayals, propaganda and many forms of government oppression. Principles of state organization, administration and law that had been defined during that period more than 2,000 years ago, are still in existence today. Today's legal systems in Europe are often directly based on "Roman Law".


In contrast to most other predictions this analysis will not focus on technology. Technological change is much more unpredictable than basic human needs and behavior, and more unpredictable than structural patterns of social and political organization. Let me illustrate this with some of the stories my father used to tell me when I was a little boy.

My father was born in 1903 in a small village of Eastern Europe. He often told me about his own childhood - how he had to get up at 4 am in the morning, how he lit a candle to wash his face with ice-cold water from a pitcher on his night stand; how he walked down to the kitchen for breakfast. It was a cozy place close to the wood fire in the stove on which his mother had prepared eggs, malt-coffee and hot milk. He told me how his father came in with his storm lantern which he needed for milking the cows. After breakfast my grandfather saddled the horse and he and my dad rode to school - my father sitting behind his dad on the horse back. My father's first task at school during winter was to bring in wood for the class­room's woodstove. After school my father walked home for almost 2 hours. In the summer he often helped the farm hands make hay which he liked a lot, because he could sit high on top of the hay bales when they took them to the barn with a horse-drawn cart.

As a small boy I couldn't hear enough about this strange world of my father's, where they had horses, candles, firewood and where they were milking cows with their hands. My father died at age 84. When he was a small child he had seen the first car coming to his village; he had watched the first Zeppelin and later the first double decker airplane. He had been witness to the electrification of their village and he had seen one of the first electric light bulbs light up in his part of the world.
But on July 20, 1969 at 20:18 UTC I sat together with him and my mother in our living room and watched on TV the landing of the lunar module Eagle on the Moon.
Imagine this: within only 66 years, my father had gone from the candle-technology of lighting to the technology of a TV-broadcast of the first Moon landing. In less than a lifetime, technology had evolved from the invention of the combustion engine to the implementation of rocket technology for a space ship.

I have little doubt that we will see equally breathtaking technological development over the next 100 years. We will see technologies, we cannot even dream of. When my dad saw the first light-bulb in his parent's house he certainly could not imagine (and no one could) that his son would sit in front of a computer linked with a worldwide digital network through a laser beam in a glass-fiber cable.

Despite this breathtaking technological change my generation still lives in a social, economic and political world which is not totally different from that of my father. We still have families, eat breakfast and go to school. In both our worlds we have wars, economic competition, poverty, wealth. There are powerful people and those that are suppressed. We still have to learn a lot and work hard to make a living. We still have ambitions and search for love and companionship. I am sure, the generation of my daughter will have the same basic challenges and dreams and a social and political environment that will not be entirely different from what we have today - or the environment that existed 1,000 years ago. However, what will certainly change beyond our most outrageous expectations is the technological environment in which these basic social, economic and political structures will be embedded. This analysis will try to focus on those basic structures and how they might evolve over the next 1,000 years. 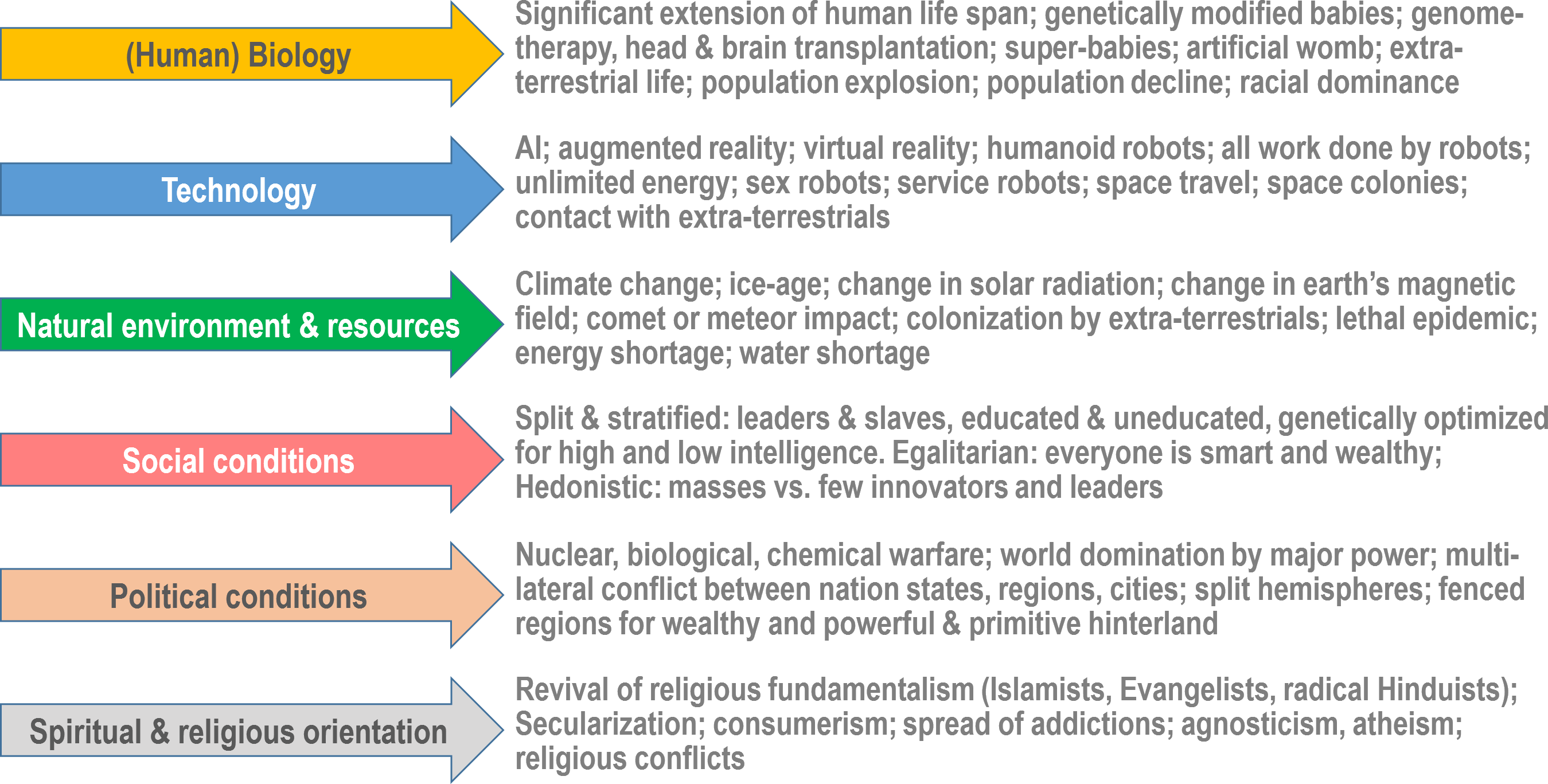