Prediction 2: Sorry - No Peace on Earth
The idea that the human species might one day - in the far future - give up war and conflict is probably an illusion. Let's face it: Humans are the most brutal and violent species on the planet. In fact we are what ecologist call an "invasive species" - ruthlessly colonizing and often destroying almost every ecosystem on earth. We are the only species on earth that routinely kills billions of other living organisms – from the hundreds of millions of cows, pigs, chickens and fish we butcher for food, to the billions of insects, plants and fungi we destroy with megatons of pesticides, herbicides and fungicides.
Day by day we wage war on other living organisms for food, fun and infrastructure; but we also fight each other more violently than any other species. We kill other humans because of religion, politics, economic advantages, road rage, jealousy or simply, because we are told so. The truth is: Blood is dripping from our hands and jaws.
There is probably something in our genes, and certainly in our education and value systems, which makes (particularly the male variant of) humans fiercely aggressive at times. We are hunters and warriors. In fact, we had to invent all kinds of symbolic systems, values and norms, social institutions, sanctions and punishments to keep us in check and prevent our societies and social groups from descending into chaos, civil war or genocide.
Not too long ago many Germans participated in an industrial-size termination machinery that killed 5 million Jews. Starting in the 1920s, but culminating between 1936 and 1938, fanatical Stalinists massacred between 3 and 20 million "class enemies" in the Soviet Union. This "Big Terror" or "Big Cleansing" affected complete ethnic minorities (such as the Chechens, the Ingush, the Crimea Tartars or the Volga-Germans), many of whom perished in the "Gulag". We nearly wiped out the Native Americans and native people of Australia; and committed numerous other genocides and mass-killings in places such as China, Armenia or Rwanda.

I am afraid, over the next 1000 years, we will probably see violent conflicts, civil wars, terrorist attacks, genocides and ethnic cleansings. The propensity towards violence and conflict seems to be an anthropological constant. 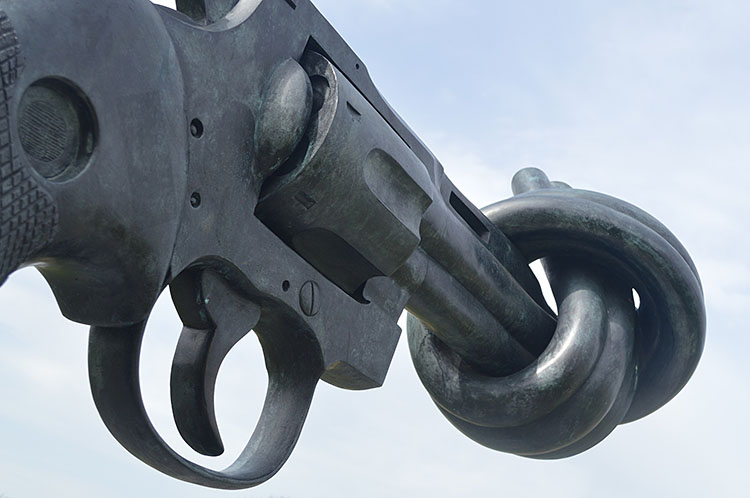 Pixabay CC0 Public Domain
Over the next 1000 years, arsenals of nuclear, biological, chemical and conventional weapons will probably expand and spread to many countries and regions all over the world. Non-proliferation treaties have not been particularly successful so far. The nuclear bomb is now available to the Iranians and Israelis, and certainly to North Korea.
New technologies might further enhance our capacity for destruction - such as digital attack algorithms that could paralyze worldwide data networks.
We can only hope that mechanisms of conflict resolution will also be strengthend in coming centuries, so that violence would be constrained and limited. Otherwise, the human species might eradicate itself or inflict such damage that civilization would be turned back to a state where primitive hunters and gatherers would struggle to survive "the day after". Simulations of nuclear conflicts show such horrendous global devastation, that even regional nuclear conflicts might result in a nearly complete eradication of the human species. Far beyond the immediate casualties a nuclear war would cause a dust plume - darkening skies over much of the habitable world. This would trigger a global nuclear winter which could last decades and destroy much of the worldwide agrigulture. Widespread food shortages would result in devastating mass famines. Industrial pollutants and toxins would become airborn and would - together with the radiation from the blasts - kill hundreds of millions long after the explosions.
Hopefully, the human species will be able to remember and imagine the utter destruction of nuclear war over the next 1000 years and implement systems to prevent such lethal conflicts.
« Previous Prediction 2 Next »