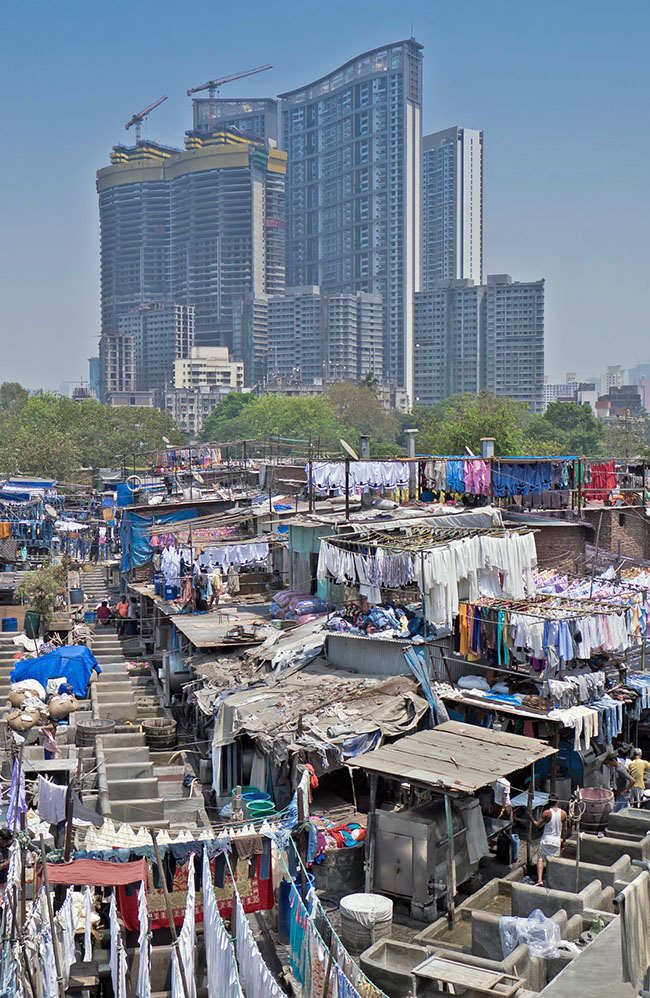 Pixabay CC0 Public Domain
1. Based on our main assumption it is highly unlikely that the urban landscape of the year 3000 will be homogenous. It is much more likely that we will have an enormous variety of “urban life spaces” – partly because we will have several types of civilizations and life styles that will co-exist next to each other.
Petronas Tower in Kuala Lumpur, Malaysia 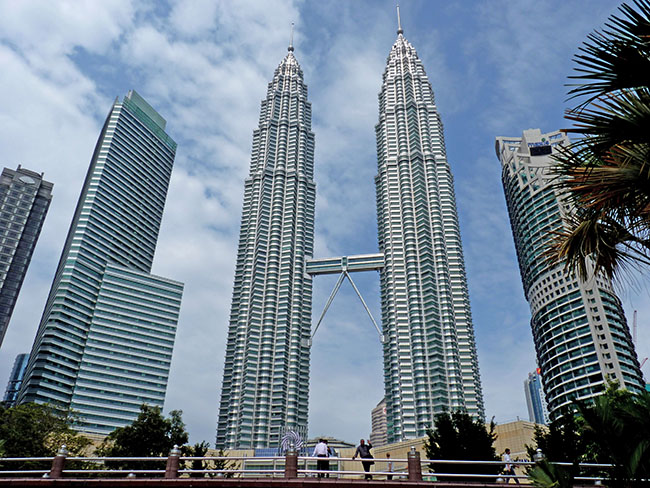 By Dudva - Own work, CC BY-SA 3.0, https://commons.wikimedia.org/w/index.php?curid=25441424
2. In a hedonistic civilization of the year 3000 cities will most likely resemble todays Shopping Malls with private-public spaces that serve numerous consumptive or addictive lifestyles. Cities, or parts of cities, might look very similar to today’s gambling resorts – such as Macau or Las Vegas. Others might be gigantic amusement parks, in which people spend months or years experiencing the numerous rides and (virtual reality) attractions. Other cities might be organized around various sports, with appropriate training facilities, sports stadiums and TV channels. We might also have cities that have specialized on the various arts – with museums, concert halls, theatres, movie and VR theatres, music studios, video and movie productions, interactive VR gaming studios and artist’s workshops. Imagine such hedonistic cities much like “Hollywood on steroids”.
Perhaps people will also live in floating cities on the ocean - similar to our cruize ships but much larger and totally self-sufficient. It is also quite likely that wealthy citizens of the year 3000 will have their private islands - isolated and protected from the ordinary citizens (much as we can already see by the beginning of the 21st century).
"Floating Cities" 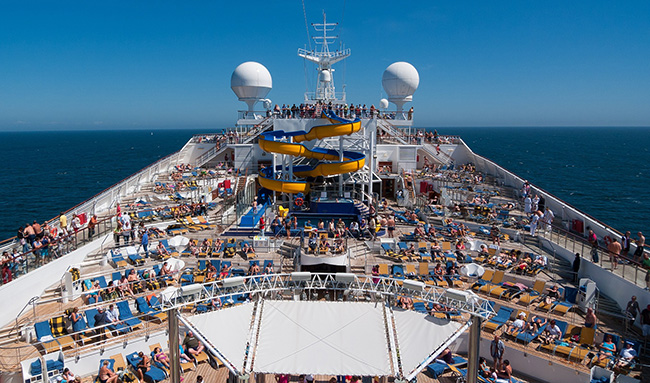 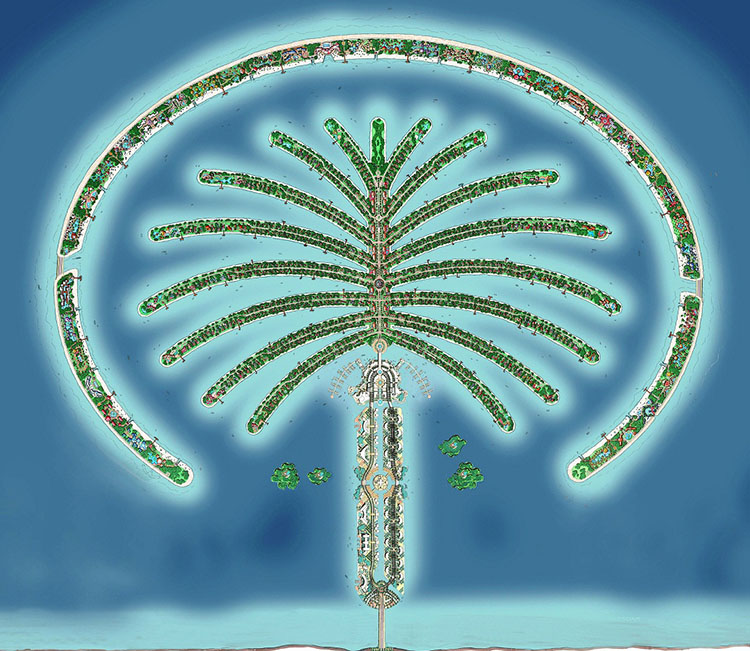 http://paradiseintheworld.com/palm-islands-dubai/
Hedonistic cities will certainly have extended surveillance and behavioral data gathering. Their inhabitants will be tracked and surveyed 24/7 – 365 days per year. The providers of the various attraction will want to know immediately if new trends and fashions for entertainment, leisure or addiction emerge. And they will try to guide the citizens to the various attractions, thrills and consumptive activities. Hedonistic cities will only be possible, if advanced digital technology and robotics will be available that takes care of most production tasks and services, while a great majority is supplied with a workless income that can be spend on the various attractions.
Virtual Village 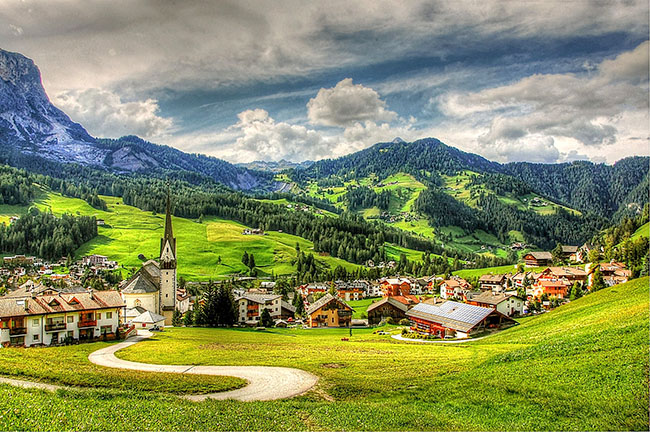 Pixabay CC0 Public Domain
3. By the year 3000, we might also have gray warrior cities that resemble today’s worst industrial areas. In such cities people might live in gigantic utilitarian apartment blocks, without any green spaces for pleasure or recreation (see image below). Workers and solders might share this highly controlled, joyless environment – basically just stored away for as long as they are not needed for fighting wars or production of military products.
Apartment block 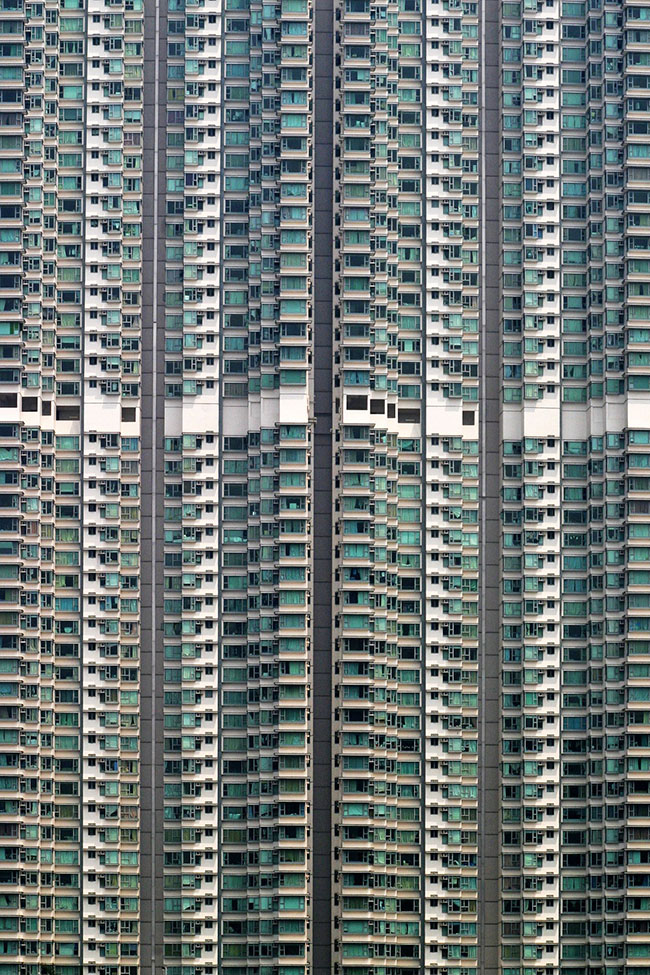 Pixabay CC0 Public Domain
Such utilitarian cities will also be highly controlled – not to anticipate the desires or consumption preferences of the citizens, but to prevent mutiny or violent conflicts. Parts of these warrior cities might be extended slum areas where captivated enemies or convicts live in barracks or huts – with rather limited infrastructure for fresh water, sewage or transport.

4. We can also imagine rather “smart”, green cities in a civilization of scientists, artists and philosophers. People would probably live in urban environments that resemble garden cities or university towns – with research centers, sports facilities, museums, theatres and other cultural facilities mixed in between green spaces and housing units. People would move around these cities with shared, but individually available transport vehicles that are almost immediately available on demand. Depending on climate people might also use ancient devices – such as bikes. Culinary robots would prepare exclusive and nutritious meals on demand, since many people would be highly conscious about the quality of their meals. Such cities will be located far away from the production sites, where industrial robots and AI systems – supervised by a small number of technical experts – take care of the production of all necessary material goods and products. Scientists, artists and philosophers might occasionally meet and mingle in such cities – primarily to find sex partners or just to enjoy life. Of course, such cities will only be possible, if almost all material production and many services are provided by robots and digital systems. Food, housing, infrastructure, machinery – all this will be produced elsewhere. 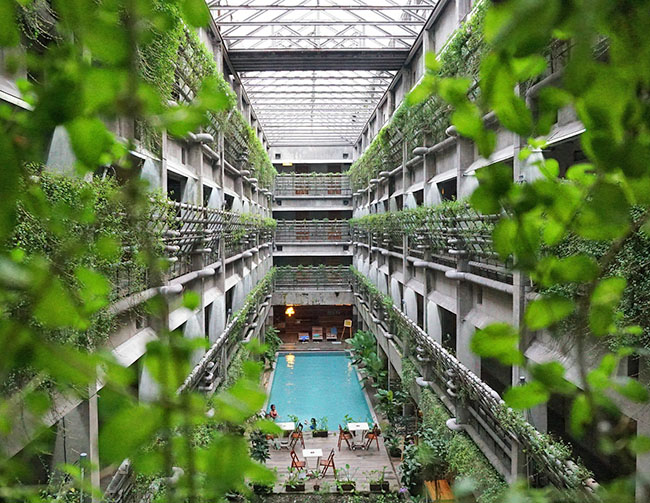 Pixabay CC0 Public Domain
5. One-thousand years from now, we might also have cities or extended settlements in space, on moons (including the Earth’s moon) or on Mars. Such space city could be like an enormously extended “International Space Station” with specialized modules for various functions, such as food, oxygen and energy production as well as working and living spaces. Perhaps there will also be torus-like rotating structures that would simulate the force of gravity for additional comfort. Science fiction authors and engineers have invented numerous designs already in the second half of the 20th century. If we have a strong civilization of pioneers by the year 3000 we will certainly have established human settlements on moons or mars. These cities will have to be extremely functional and well designed to conserve construction material, which would have to be transported from earth or produced from material found on location. The dangers of a hostile environment will make these cities highly technical – with only limited space for recreation and pleasure.
Space settlement 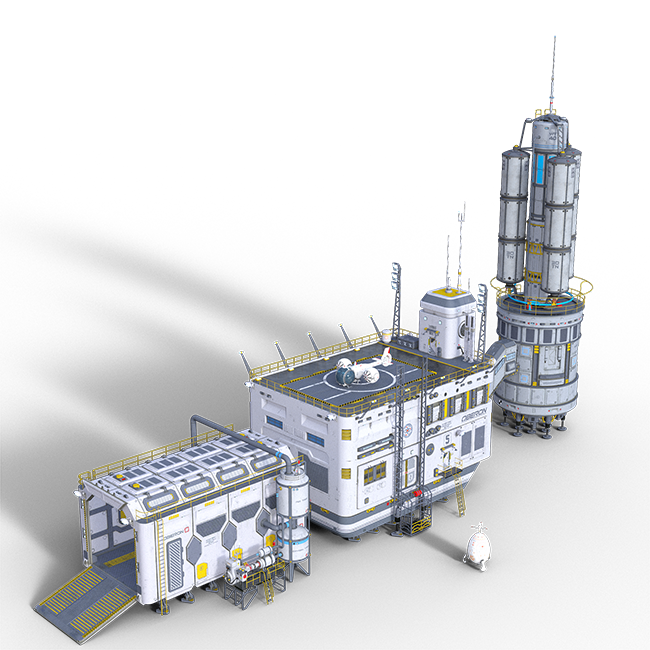 Pixabay CC0 Public Domain
6. By the early 21st century IT industries have been promoting the idea of a “smart city”, by which they envision a city that uses digital technology for streamlining transport, infrastructure, energy consumption and various other urban services. Unfortunately, this is a rather pathetic concept of a “smart city” - characterized by a shocking lack of social and economic imagination and a truly puzzling ignorance of actual problems. Facing an urban world population of some 6 to 7 billion people by the end of the 21st century cities have more urgent problems than on-demand (flying) taxis, “smart” electricity meters or “intelligent traffic control”.
Green housing 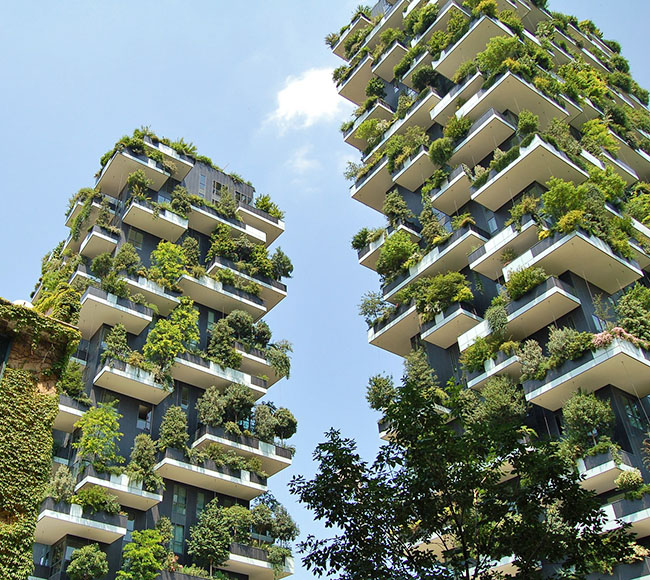 Pixabay CC0 Public Domain
Hundreds of millions of urban citizens do not have access to clean drinking water, proper sanitation, or stable electricity supply. They live in cardboard or wooden shacks, without toilets, proper roofs or smoke-free stoves. It is quite possible that for the first few centuries of the 3rd millennium billions of urban dwellers will live in gigantic slums – such as those of Lagos, Calcutta, or Nairobi today. What these cities need is not digital technology, but sand, concrete, and steal for building housing, water supply and sewage systems, basic roads and proper power lines.
Marina Bay Sands Gardens, Singapore 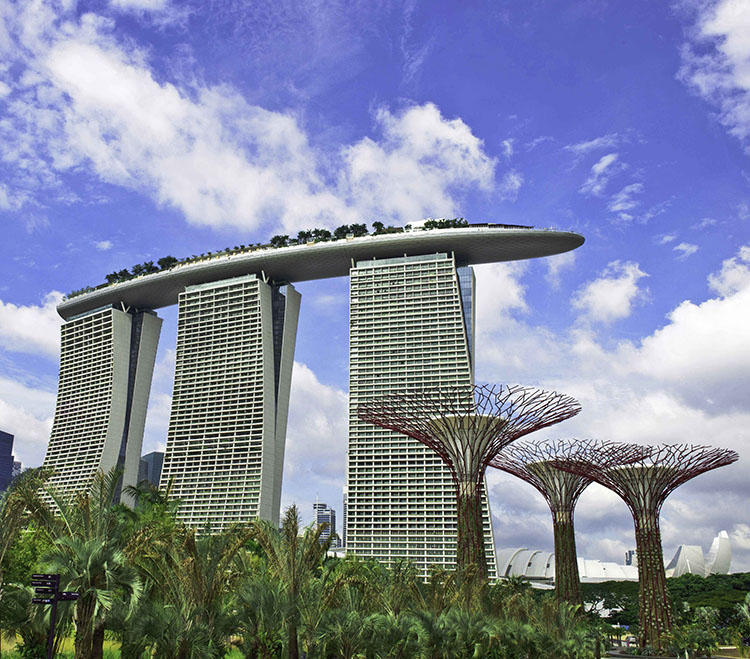 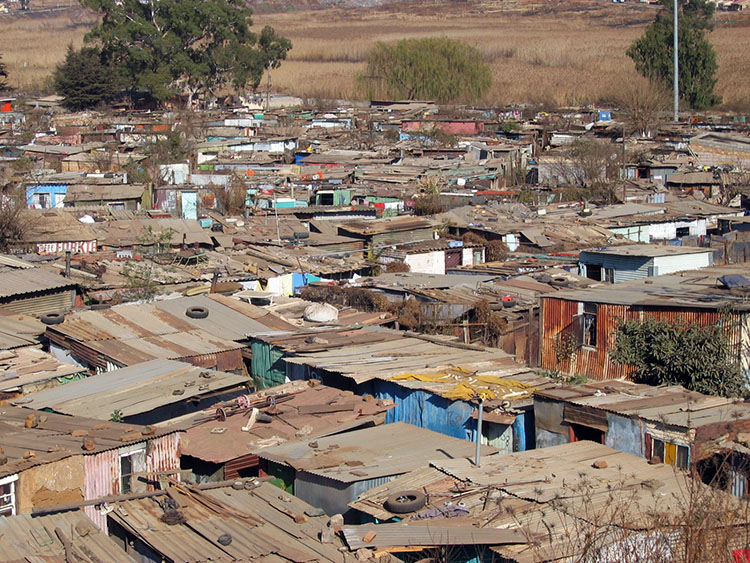