Q & A:
How many people will live on earth by the end of the 3rd millennium?
If you want to hear my best guess: Either some 11 to 15 billion or just a few hundred thousand - with a preference for the 11 to 15 billion estimate.

I know, this is a big range; but the truth of the matter is that we simply don’t know. I have spent almost all my professional career with population projections and I am pretty sure (in fact, almost certain) that the world population will reach around 10 billion by the end of the 21st century.
However, what will happen in the centuries beyond is totally unclear. Some demographers believe world population will slowly start to decline to a more “sustainable level” of 3 to 5 billion. Others seem to imply that even a 30 billion world population would not be impossible.
I am more in the middle: My best guess is that world population will continue to grow – however, quite slowly from 10 to 15 billion over the third millennium.

Of course, much depends on developments in non-demographic sectors, which are impossible to predict. Let me highlight some of these uncertainties:

1. Climate change: Most experts believe that the global climate is changing due to anthropogenic causes. This would trigger changes in the natural environment which could certainly affect global population trends in the 3rd millennium. Several projected changes could be relevant: The warming of the oceans and the associated increase in sea levels, rising average temperatures in countries with already very hot climate, increased frequency of huricanes, melting of the permafrost soil in nothern hemisphere and higher frequency of extremely hot periods. All these would certainly influence global water cycles and might lead to significant changes - and probably declines - in agricultural production. Infant and child mortality might rise due to food shortages and famines, as well as higher disease incidences in the poorest countries of Asia, Africa and Latin America. Mosquito-borne diseases, such as Malaria, dengue fever and viral encephalitis, might spread to densely populated regions further north. An increase in sea surface temperature and sea level might lead to higher incidence of water-borne infectious and toxin-related illnesses, such as cholera and shellfish poisoning (Patz, 1996; Lipp, 2002; Liang, 2017). 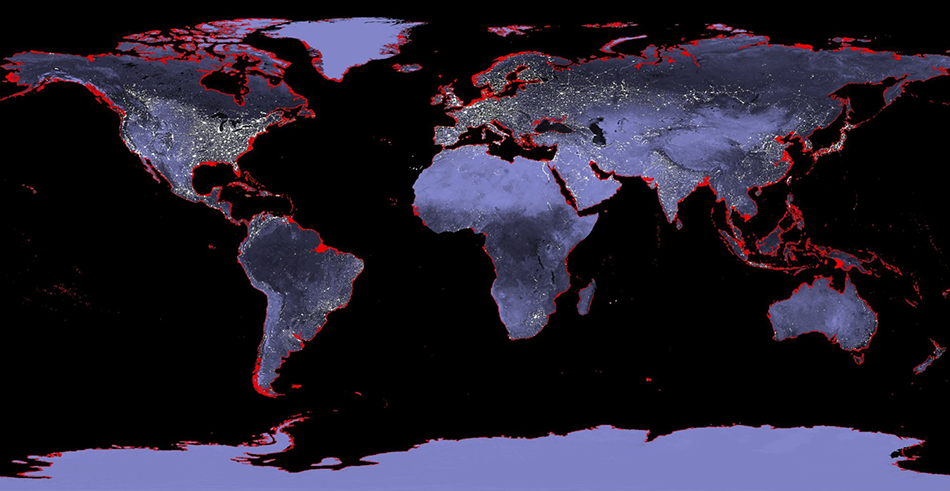 By NASA - https://www.flickr.com/photos/11304375@N07/6863515730/ additional source http://www.livescience.com/19212-sea-level-rise-ancient-future.html (Live Science), Public Domain, https://commons.wikimedia.org/w/index.php?curid=40213299
There is also the possibility that higher (ultraviolet) radiation and extreme heat stress could weaken the immune system of large populations - leading to higher morbidity and mortality.
Since climate change will particularly affect already very large populations in India, Pakistan, Bangladesh, China, Southeast Asia and Africa, the impact on the world population could be significant.

2. Technological change: As I have outlined on this website, it is probably impossible to predict technological change, because it is ultimately based on scientific discoveries which cannot be anticipated. There are numerous possibilities how global population trends might be altered by certain technologies. For instance, we might be able to significantly extend average human life span, which would increase the global population. We might also be able to improve agricultural productivity or produce synthetic food, which might expand the food basis. Technology could also help to prevent negative impacts from climate change.

3. Nuclear war: There is abundant research that shows the devastating global impact of a major nuclear war. Depending on the number and location of nuclear explosions the direct death toll alone could be devastating. However, a “nuclear winter” caused by (radioactive) dust in the upper atmosphere shielding sunlight could ravage the world’s food production capacity and lead to subsequent famines of unprecedented scale. Hundreds of millions more would die of the subsequent food crisis.


The "Baker" explosion, part of Operation Crossroads, a nuclear weapon test by the US military at Bikini Atoll, Micronesia, on 25 July 1946. 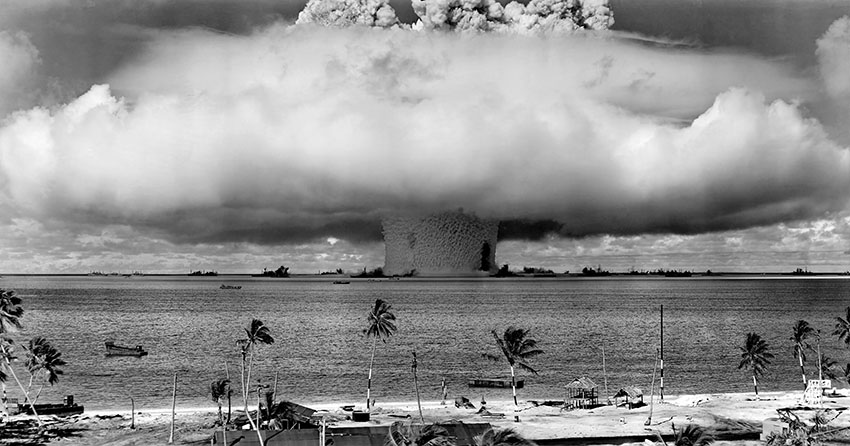 By Original: United States Department of Defense, Public Domain, https://commons.wikimedia.org/w/index.php?curid=6931019
Even a relatively small nuclear device of less than 10 kilotons exploded by terrorists in the middle of a major metropolitan area could directly kill hundredthousands and lead to early death among millions due to secondary effects on the global economy and food supply (Bunn / Roth, 2017; Meade / Molander, 2006). While there is evedence that terrorist groups such as al-Qaeda have undertaken efforts to obtain nuclear weapons, it appears that they only have ambition, not capability or the knowledge to fabricate a nuclear device (Jenkins, 2008). 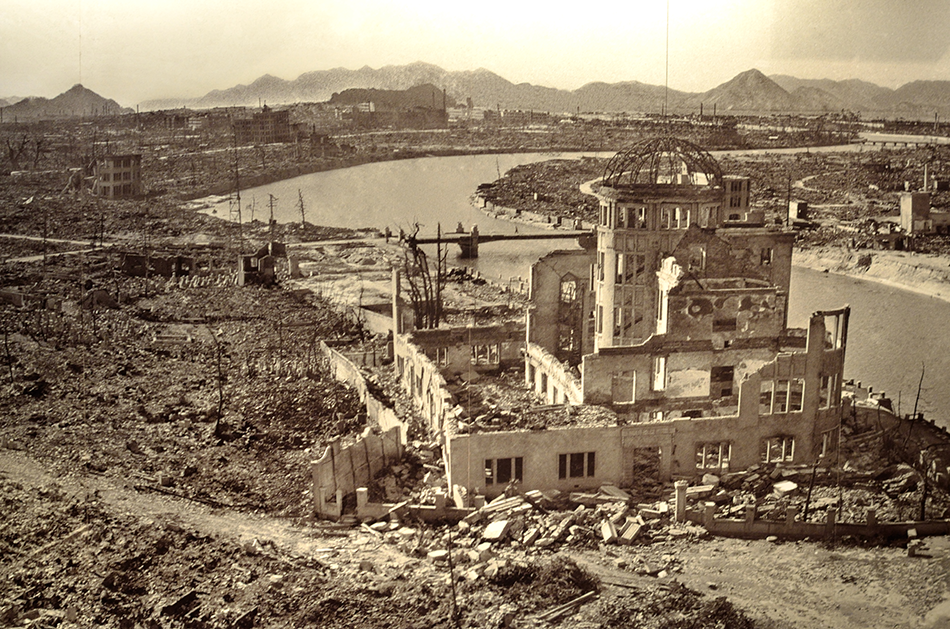 By M M from Switzerland - Hiroshima_DSC_3123, CC BY-SA 2.0, https://commons.wikimedia.org/w/index.php?curid=40538457
Unfortunately, several nations, including rogue regimes, have now acquired the capability to bomb the human species back into a Neolithic state. If it really comes to an extended nuclear conflict between two or more of the nuclear powers USA, China, Russia, India, Pakistan, Iran or North Korea - with hundreds of strikes and counter-strikes - the world population could easily be decimated by many hundreds of millions – even billions. A total collapse of the global economy, decades of "nuclear winter", widespread nuclear contamination and continental-scale distruction of infrastructure would reduce humankind into small tribes desperately fighting for survival.

4. Natural disaster: The ultimate natural disaster would be the collision of a major meteorite with earth. We know that massive meteorites have hit the earth at geological times (Adams, 2008). One of the biggest known meteorites created the Vredefort Crater in South Africa about 2 million years ago. The crater has a diameter of 180 km. The Chicxulub Crater, located on the Yucatán Peninsula in Mexico, even has a diameter of between 180 and 300 kilometers, which would make it the largest documented. Many scientists believe it was made by the massive meteorite that caused or contributed to the extinction of the dinosaurs. According to estimates of astrophysicists there may be several hundred meteorites that can come close to earth. Just recently, on 1 September 2017, a massive space rock named Florence, roughly 4.4 kilometers across, whizzed past Earth at a relatively close distance of only 7 million kilometers. It was the biggest asteroid to fly near Earth in more than a century. Its return is scheduled for the year 2500. If, for some reasons, its trajectory is changed only slightly it may well hit the earth with catastrophic effects for the human population.
A meteorite could certainly end the human species – just as it already might have ended the dinosaurs. However, we will certainly develop technology over the next several decades that could change the deadly trajectory of anything that might impact earth. 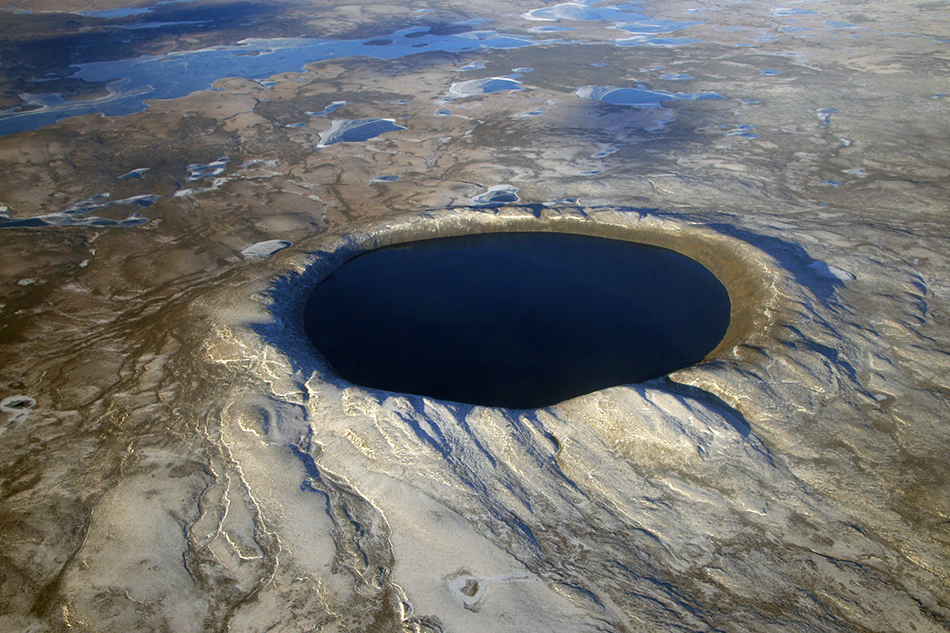 Since 2002, a highly automated collision monitoring system called Sentry continually scans the most current asteroid catalog for possibilities of future impact with Earth over the next 100+ years. As of February 2017 there are roughly 680 near-Earth asteroids listed on the risk table (Wikipedia; NASA/JPL Near-Earth Object Program Office).
There might also lurk massive lethal volcanos underground - like the Yellowstone Caldera in the United States. It was calculated that an explosion of Yellowstone might wipe out the Western United States, kill some 87,000 people and alter the course of human history through a global “volcanic winter” lasting several years and shrinking the world food supply (Brannen, 2017).

5. Another natural disaster that could decimate the human species would be a massive pandemic. It may emerge spontaneously – or it may be caused by an accident in a bio-lab or a lethal virus or bakteria may be released in a terrorist attack. In the past, it was unlikely that an epidemic would eliminate the human species or even cause a major decline. We have the experience of the “Black Death” (bubonic plague) in Europe which may have killed one third of the European population or with the "Spanish Flue" that was probably the largest epidemic in history. There is also the HIV-AIDS epidemic which may have killed a few dozen million people. And there are dozens of other infectious diseses, such as Tuberculosis Smallpox, Cholera or Polio that have decimated, but not eradicated, the human population in the past. None of these epidemics had changed the longer-term course of global population increase. 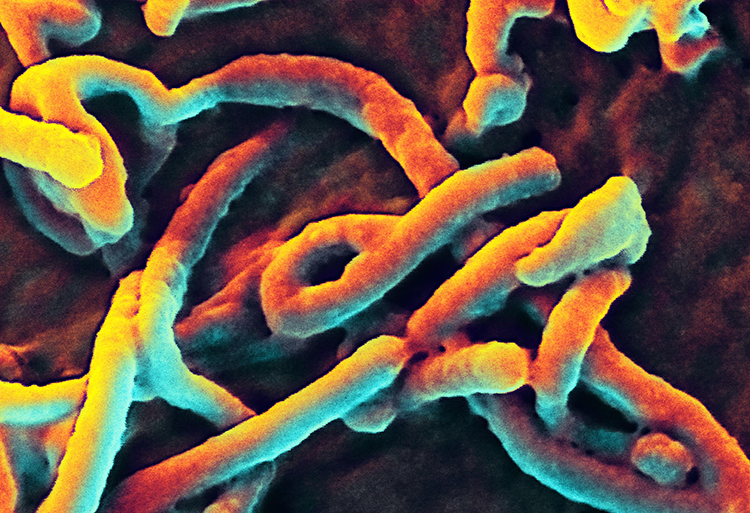 By NIAID - Ebola Virus, CC BY 2.0, https://commons.wikimedia.org/w/index.php?curid=36038623
In the past, epidemics typically “ran dry” as soon as they had decimated the population to a lower density. And the most lethal viruses or bacteria typically did not cause geographically extended epidemics – because they quickly killed the victim even before they could infect other people. While Ebola is certainly one of the most lethal infectious diseases, it was contained for a long time in a few remote places, because it quickly killed all victims in a village before they could get in contact with the outside world.
This may be quite different in the densely populated urban world of the 3rd millennium. Here lethal epidemics could spread quickly through very large populations. Therefore, we have to see epidemics as a real and devastating risk to the global population.

6. Finally, we might consider the numerous environmental constraints that might perhaps not decimate world population, but certainly could slow down its growth. Various resources might become scarce and therefore expensive: Freshwater, energy, sand, settlement areas, arable land, rare metals and minerals or unspoiled natural environments. Fortunately, past experience has shown that human ingenuity and engineering was – and probably will be – able to compensate those natural limitations. 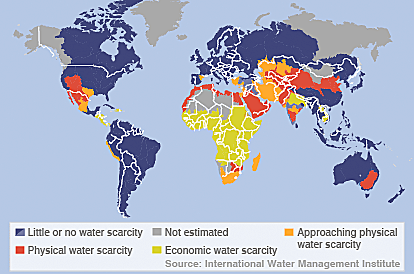 By BBC NEWS - http://news.bbc.co.uk/2/hi/science/nature/5269296.stm, CC BY-SA 1.0, https://commons.wikimedia.org/w/index.php?curid=25387034
More serious might be the social, political and economic pressures that will pleague the gigantic population concentrations that we can expect in the 3rd millennium. How will people survive cramped into megacities with 120 million or more? How will they solve the tensions that will undoubtedly arise from the staggering discrepancies in wealth, ethnic, racial and cultural background, and from the differences in education and knowledge? With a 10 to 15 billion world population this will be much more difficult than with a 1 or 2 billion world population.

While there are several factors that might decimate the global population in the next millennium to a few hundred thousand individuals or even eliminate the human species, I believe it is more likely that the world population will continue to grow slowly - even after it has reached 10 to 11 billion by the end of the 21st century. Modern medical, agricultural and food technology will solve all problems that might arise from the growing numbers.

In conclusion, I assume that by the end of the 3rd millennium the world population might be around 15 billion – slowly rising (on average) with about 500 million people per century. This will be a much slower increase than the one we have experienced – or will experience - over the 150 year period from 1950 to 2100, when the world population will “explode” by a staggering 7 or 8 billion people. This unprecedented period of enormous population growth will not repeat itself. It was like a “demographic singularity” – a unique period in the life cycle of the human species which lifted its global population from a 1 to 2 billion level (until the beginning of the 20th century) to the 10 to 15 billion level (after the 21st century). 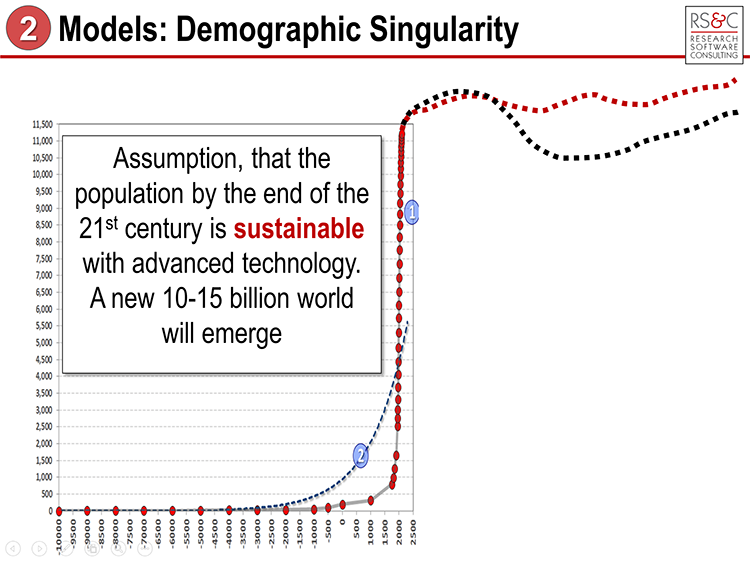